REGISTER FOR THE IFC

The 2022 International Flameworking Conference at Salem Community College (SCC) will be the 20th installment of this nationally and internationally attended event that celebrates excellence in the glass-working process known as flameworking. In 2022, the conference will continue its core mission of education, and in the promotion of the techniques and its practitioners. The weekend will include presentations, demonstrations, exhibits, and vendor displays. This momentous year will celebrate 60 years of Scientific Glass Technology and 20 years of Glass Art at Salem Community College, highlighting SCC’s unique and integral role in the field of flameworking. Presenters for this seminal event will include alumni from Salem’s glass programs whose successful careers have impacted the fields of scientific and creative glass.

Sally Prasch is perhaps the perfect blend of advanced technical skill and intuitive creativity, with a background in both scientific glassblowing and fine art. Sally is an experienced scientific glassblower and currently the director of the glassblowing labs at the University of Vermont and the University of Massachusetts, offering fabrication, design consultation, repair and modification of existing glassware. She served as the Director of the glass lab at Syracuse University for 15 years.

At age 13 she began her career working as a part–time apprentice at the University of Nebraska with Lloyd Moore. She obtained her BFA in Glass (Furnace Glassblowing) and Ceramics at the University of Kansas. In 1986, Sally received an Associate in Applied Science from Salem Community College.

After pursuing her studies, she started her glass business, which is still active today. She also participates in different glass conferences and demonstrations. In addition, she has taught workshops in various locations such as Urban Glass in New York City, Niijima Glass School in Japan, Penland School of Crafts in Penland NC, Pilchuck Glass School in Stanwood, WA, Karma Glass in Denizli Turkey, Ingalena Klennell’s Studio in Sweden and many more. Both her art and scientific glasswork are exhibited worldwide. 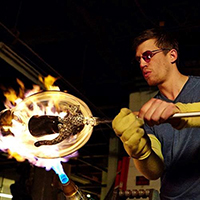 Kiva’s passion with glass began early in life, and was anchored with his college degree in Scientific Glassblowing. Through years of work creating complex glass instruments for scientist’s use, he has perfected his precision and technique in manipulating glass. Beyond the scientific community, Kiva is more commonly known for his exquisite glass goblets, bottles, pendants and vessels. Kiva’s artistic work is influenced by his interests in history, mythology, and the natural world. 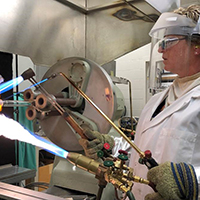 Doni Hatz is a scientific and artistic glassblower from Portland, Oregon. She started her glass study in furnace glassblowing at Clark College in Vancouver, Washington in 1982. Within a year she changed focus and moved to New Jersey to study scientific glassblowing at Salem Community College in Carney’s Point 1983-1985. From there she began working in upstream research and development for Union Carbide Corporation 1985-1988 in Tarrytown, New York. It was there she became a member of the ASGS and the New York Metropolitan section (that is now the Northeast Section.) She moved to Long Island to work in the chemistry department at State University of New York at Stony Brook under Rudy Schlott 1988- 1992.

Currently Doni works in research & development for the Procter and Gamble Company in Cincinnati, Ohio for the last 26 years. She has been active in the ASGS holding many positions most notably as President 2000-2001. She is a strong advocate for educational development and dissemination of information with the ASGS, the Glass Art Society and International Society of Glass Bead Makers throughout her career. 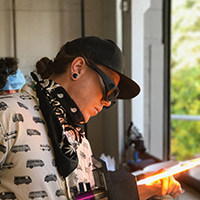 Daniel S. Coyle started blowing glass in 2003. In 2006, after graduating from SCC with a degree in Scientific Glassblowing, he started his career as a scientific glassblower. After 5 years working for a chemical company, he quit his job in order to pursue his artistic vision in glass pipes. He currently resides in Western Massachusetts, where he works alongside of some of the state's top pipe makers.

"Often my work is playful in nature and can remind you of toys; I guess I like to bring the viewer (or user) back to their childhood and also remind them to not take life so seriously... Why pipes? Making an object into a pipe will allow someone to bond with that object. They will have experiences with it, develop a relationship with it, in time it will become more than a piece in their collection- it will become sentimental." -Coyle 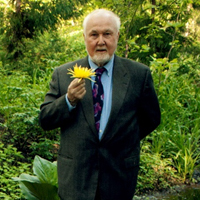 A pioneer in the studio-glass movement, Paul Stankard’s career has spanned more than four decades. He has established an international reputation for interpreting nature in glass with his floral art. Paul maintains an active career in the studio, while teaching at institutions like the Penland School of Crafts, The Studio at the Corning Museum of Glass and Urban Glass. Paul is also the artist-in-residence at Salem Community College’s Glass Education Center in the glass studio which bears his name. Stankard’s work is represented in more than 40 museums worldwide.

In 1963, Paul graduated from the Salem County Vocational-Technical Institute, the predecessor institution of Salem Community College. In 1999, he was named a Distinguished Alumnus of the College. In 2008, the College granted him an honorary associate of fine arts degree in recognition of this inspiration in the establishment of the glass art program. Paul has received many honors and accolades from a numerous organizations. He has received honorary doctorates from Muskingum College in New Concord, Ohio, and from Rowan University in Glassboro, New Jersey.

Paul has published three books, No Green Berries or Leaves: The Creative Journey of an Artist in Glass in 2007, Spark the Creative Flame: Making the Journey from Craft to Art in 2013, and most recently Studio Craft as Career: A Guide to Achieving Excellence in Art-making in 2016. 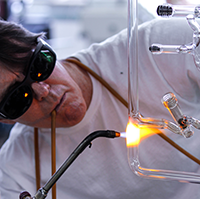 Tracy Drier began his career as a paper engineer, but glassblowing was always his first love. When he turned 30, he decided to make the switch, and moved to South Jersey to enroll in the scientific glassblowing program at Salem Community College. The following year, he took a position with Aldrich Chemical Company in Milwaukee, Wisconsin. In the fall of 2000, he moved to Madison, Wisconsin to take on a new role as the Master Glassblower for the University of Wisconsin Chemistry Department. In this position, he particularly enjoys working with end-users to design, build and refine glassware to meet their research needs. 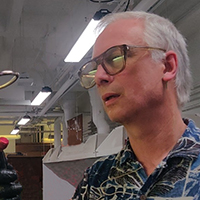 Erich Moraine started his glass career when he graduated from SCC in 1979. Over the years he worked a series of industrial as well as research positions throughout the Midwest. These days he stays busy as owner of Wild Rose Glass with OEM glassware design and manufacture including CO2 lasers, vacuum systems, distillation equipment and custom glassware for local research firms. He is currently the Chair of the Midwest Section of the ASGS. 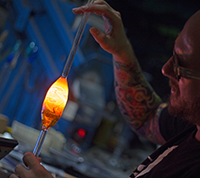 Jeremy Grant-Levine aka GERM is a glass artist and educator based out of Philadelphia PA. Jeremy started flameworking as a student at Salem Community College in 2003 and graduated with a degree in Scientific Glass in 2006. After a few years working in the scientific industry, he left to develop his own artistic voice and skills in Philly’s growing pipe making community. Jeremy spent several years traveling the country, learning from and working in collaboration with his contemporaries. He is a founding member of “Krushmore”, a collective studio in Philly along with Marbleslinger.

Jeremy has taught flameworking all across the United States and had the honor of teaching with Gianni Toso in Israel. While pipe making is Jeremy’s first love in glass, he has also ventured into large scale installation art with his project “1000 Glass Cranes” where he spent 2 years creating 1000 origami cranes out of glass. The full immersive installation was shown at The Aviary Gallery in Philadelphia. Jeremy is also known for his borosilicate interpretation of the traditional German soft glass technique called “montage”. 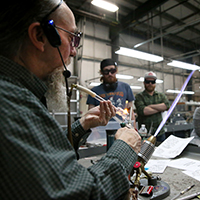 Bob Russell is currently the Instructional Chair of Scientific Glass Technology at Salem Community College. Prior to that he worked at Chemglass Lifesciences for 30 years. Bob Russell earned a bachelor’s degree in art from Virginia Tech in 1977 and a certificate in Scientific Glass Technology from Salem Community College in 1979. After graduating from SCC, he began working in the scientific glass field, expanding his knowledge of many glasses, including soft, lead, Pyrex and quartz. An active member of the American Scientific Glassblowers Society (ASGS), Delaware Valley chapter since the mid-1980s, he has served as chair, vice-chair, and currently serves as director. He has served as technical posters chair and as a technical demonstrator as ASGS national symposia. Bob was a demonstrator at the 2015 International Flameworking Conference. 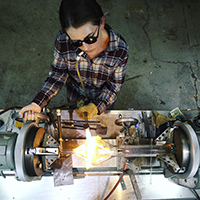 Katie Severance earned an associate degree in Scientific Glass Technology from Salem Community College in 2011. While studying at Salem, Katie completed an internship with Mike Souza at Princeton University. There she fabricated target cells for high-powered lasers while working with specialty glasses such as aluminosilicate, GE180, and quartz. In 2010, Katie joined Chemglass Life Sciences, where she learned to fabricate various borosilicate apparatus while operating a glass lathe. During this time, Katie furthered her glass education at night by studying artistic flameworking with renowned artist Paul J. Stankard.

Katie has presented at the annual symposium of the American Scientific Glassblower Society, and at the International Flameworking Conference. Katie now teaches at Salem Community College, works at AG!, USA Inc. in Vineland, and is an independent artist in Philadelphia, combining her skills as a scientific lathe worked with her passion for sculpting realistic floral designs. 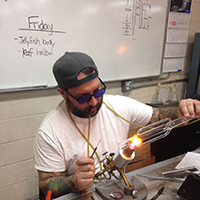 Carl Natalino receive his Associate in Applied Science degree from Salem Community College in 2002. Upon graduating from the program Carl began working at Chemglass Life Science, where he continues to this day. Carl began instructing at Salem Community College in 2017. With over 15 years of extensive on the job experience in industry Carl is an excellent instructor and mentor to his students here at Salem Community College. Outside of his work as a scientific glassblower Carl also works with glass creatively. Carl maintains a shared studio in Philadelphia, PA where he works on his artistic glass. Carl is an active member of the American Scientific Glassblowers Society (ASGS); he was a featured demonstrator for a Delaware Valley ASGS meeting in 2017. 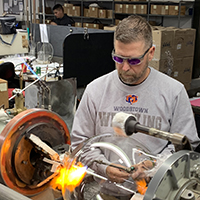 About the International Flameworking Conference

Each spring, Salem Community College hosts the International Flameworking Conference (IFC), a three-day event that promotes excellence in flameworking through artist demonstrations and scholarly presentations. The weekend attracts glass artists and enthusiasts from around the nation and world.  Salem Community College and the SCC Foundation are indebted to distinguished members of the glass art community who have graciously shared their talents at the IFC.