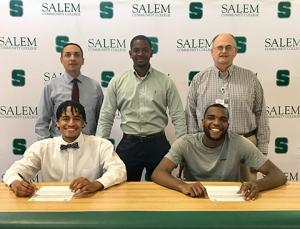 Stephon Fauntroy: A 6-foot-2 combo guard from Newark, Del. who graduated from Glasgow High School in 2016. “He is a scrappy and tough leader who will bring maturity, high energy and a disciplined mentality to our program,” said Williams. “While a member of the Greater Newark Boys and Girls Club, he was named the club’s youth of the year.”

Fauntroy will study business administration. After earning his associate degree, he plans to further his education and basketball career at a four-year institution. Stephon said he is "excited to get to work in the classroom and on the court and be the first person in his family to go to college."

Maurice Freeman: A 6-foot guard from Howard High School of Technology in Wilmington, Del. “Maurice will be a second-year player as he played one season at Houghton College (Division III) in New York,” said Williams. “He is a high-energy, athletic playmaker who does a little bit of everything on the court. Maurice is hard worker both in the classroom and on the court.”

Freeman will study accounting. After earning his associate degree, he also plans to continue his education and career at a four-year institution.

Said Director of Athletics Dr. Bob Bunnell: “We are delighted that Stephon and Maurice will be joining the Mighty Oaks next season. Each of them should provide some mature leadership to the team, as well as loads of playing experience.”

SCC will resume Mighty Oaks Athletics in the 2019-2020 academic year with cross country, men’s and women’s basketball, baseball and softball. For more information, contact Bunnell at bbunnell@salemcc.edu or 856.351.2239.