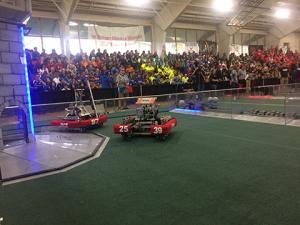 The FIRST® Robotics team The LuNaTeCs from Carneys Point will co-sponsor the 16th annual Duel on the Delaware on Saturday, October 21 at Salem Community College (SCC). The Duel will again attract over 45 teams from southern New Jersey and throughout the mid-Atlantic that are part of the FIRST Robotics Competition and the FIRST Tech Challenge.

The annual pre-season robotics competition – co-sponsored with the Miracle Workerz of Wilmington, Del. -- will be held in SCC’s Davidow Hall in Carneys Point.  The competition runs from 9 a.m. – 4 p.m. and is free.  Families are encouraged to attend.

The FIRST Robotics Competition (FRC) brings STEM and sportsmanship together, with indoor field games designed for 120-lb. student-built robots. FIRST Steamworks, the 2017 game, requires alliances of three robots to transport gears across the field to help turn rotors on their respective airships.  Robots also collect balls for fuel and climb ropes to board their airships before the end of the match.  Off-season competitions help to introduce new team members to the FIRST competition format, and give the 2017 robots a few last spins on the field before the teams start building for the 2018 season in January.

Robots are built in a six-and-a-half-week timeframe in January and February.  Students work alongside technical professionals to design, prototype, build, program, and test industrial-strength robots to complete in the annual FIRST competition.  Local district competitions occur in March.  Successful regional teams are invited to the World Championship in April, where hundreds of robot teams around the world face off.

The FIRST Tech Challenge (FTC) is another high school competition mirroring FRC, but with smaller robots and playing fields, which are more easily adapted into a school curriculum.

At the Duel event, FIRST Tech Challenge teams will be working on their robots to compete in the current “Relic Recovery” competition.  FTC team members can also participate in a series of workshops and training sessions where regional robotics team members learn Java programming, Android App development, 3D printing, and other STEM skills.

Both The LuNaTeCs and The Miracle Workerz are in their 19th seasons of shaping future scientists, engineers, and programmers through robotic competition.