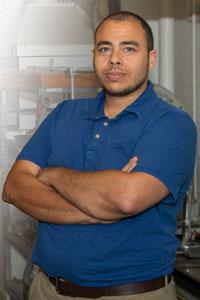 I had been looking for a university position for a while and when I heard the position was open I didn’t dare hesitate to apply,” said Jordan, who grew up in Tarpon Springs Fla.

A fellow SCC graduate, Brian Markowicz, a scientific glassblower at Georgia Tech, helped Jordan decide to apply for the Purdue position. “I had been chatting with Brian for some time about the world of the university glassblower. I have found that the people in our small community will be our greatest resource. Each individual is a wealth of knowledge and experience and most have been more than enthusiastic to share both.”

Jordan began flameworking four years before enrolling at SCC. “I have never been one to consider myself an artist, so the scientific glass program appealed to me immensely,” he said.

“A focus on technical skills and practical application seemed like the best path for me so I decided to move to New Jersey and give it a go."

“Under the tutelage of Dennis Briening, I learned many of the technical applications that I would use time and time again throughout my career thus far,” said Jordan. “Aside from that, the networking opportunities, I was exposed to through the school still serve me well to this day.”

What does he look forward to the most at Purdue? “I look forward to any opportunity I have to aid in the pursuit of knowledge. I want to help do things that haven’t been done before.”

His advice to prospective and current SGT students: “Spend as much time melting glass as you can. Don’t be afraid to fail. You will break plenty of glass during your career, so you might as well get to it. Most of all, always be ready to learn.