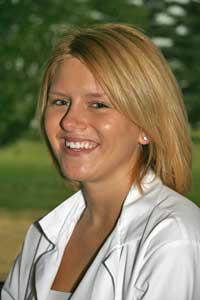 Brooke Marie Alston graduated with a Practical Nursing Certificate in 2008 and an Associate Degree in Nursing in 2009.  While at SCC, she participated in the Student Nurse Organization, serving as treasurer in 2008-09.  She transferred to Wilmington University and graduated with a Bachelor of Nursing degree in 2011.

A registered nurse licensed in New Jersey, Delaware and Pennsylvania, Alston cares for patients on an acute-care telemetry floor at the Memorial Hospital of Salem County.

According to her nominator, Assistant Professor of Nursing Ann Gioia, Alston “thrives on knowledge and new experiences and strives to make herself a more educated person, which carries over in her work as an RN.”

The summer following her 2009 graduation, Alston worked at the Bbiri Health Clinic in Bulenga, Uganda.  During her one-month stay, she immunized babies and children; conducted HIV testing and counseling; and worked with outpatient diagnosis, treatment and care.   During that time, she also worked at the Raising Up Hope for Uganda Orphanage.  Last October, she undertook s a three-week trek to Mt. Everest Base Camp in Nepal with Global Volunteer Network.  Beforehand, she raised $2,000 to benefit two orphanages in Nepal.

A 2005 graduate of Pennsville Memorial High School, Brooke not only exemplifies health and well-being in her professional life, but also in her personal life.  She is a competitive runner, having completed six marathons in five states and the District of Columbia in 2010 and 2011.