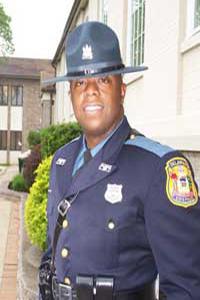 William served on the SCC Social Science and Education Program Review Committee, participating in the review and evaluation of the Criminal Justice program.  He collaborated with the College to update and improve the program to better serve its students.  In addition, he spoke at the Educational Opportunity Fund awards banquet as the keynote speaker in 2007, sharing his life experiences and providing students with career advice.  William proudly tells others that his time at Salem Community College prepared him for his law enforcement career.

A Delaware state trooper since 2008, William conducts criminal investigations, prepares arrest warrants, interviews criminals and completes thorough reports to ensure a maximum penalty for offenders.  As an Evidence Technician for the Troop 1 – Division C shift, he is responsible for processing all major crime scenes and securing all pertinent evidence.  William completed the Delaware State Police Homicide Training Conference on Forensic Pathology Techniques and Northeast Counterdrug Training on Interview and Interrogation.

William performs traffic safety duties such as running radar and DUI checkpoints.  He was awarded Delaware State Police Troop 1 “Traffic Ace 2009.”  That year, he conducted 907 traffic arrests and issued 32 DUI citations.  He was selected to represent the State Police in the Office of Highway Safety’s “Click It or Ticket” campaign with his photo appearing in a state-wide marketing campaign.

Before joining the Delaware State Police, the former Pilesgrove resident and Woodstown High School graduate served as an Officer First Class with the New Castle County Police Department from 2004-2008.  William was named the most physically fit recruit at the New Castle County Police Training Academy and was recognized for perfect attendance (2004-2007).  He served in uniform patrol and represented the agency at recruitment events.  In addition, he participated in the Academy training and mentor programs, volunteering over 200 hours, and was an Honor Guard member for four years.