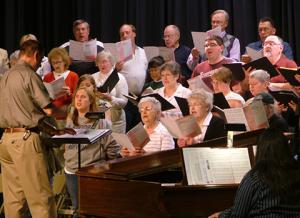 From the 16th century sacred music of Palestrina to the 21st Century pop music of “Best Day of My Life,” the Salem Community College Oak Singers will present their annual Spring Concert with “Choral Music Then and Now” on Saturday, May 13 at 3 p.m.  The concert will be held in the Sol and Jean Davidow Performing Arts Theatre in Davidow Hall on the SCC campus.

The first half features more traditional choral music by such composers as Palestrina, Mendelssohn and William L. Dawson, to the music of the rock opera, “Rent,” by Jonathan Larson.  The choir will sing some interesting a cappella selections which have proven to be very challenging for this non-auditioned college community chorale.  One such selection is the beautiful, “The Blessing,” as recorded by the Celtic Women, with soloist Marie Boody.

Following an intermission, the second half is devoted to popular music beginning at the turn of the 20th century.  Included in this tribute will be a medley of popular song from the early 1900’s, and a version of “Take Me Out to the Ballgame” sung by the men of the choir.  Featured also will be the music of Irving Berlin’s “Puttin’ On the Ritz” and Hoagy Carmichael’s “Georgia On My Mind,” with added guitar by Michael Roberts.

The Oak Singers will conclude their concert with the music of the Broadway hit “Les Miserables” by Alain Boublil and Claude Michael Schonberg, as arranged by Ed Lojeski.  “Les Miserables” had its Broadway debut in March 1987, making this year the 30th anniversary.  The show -- with its background of the French Revolution -- is a dynamic production of love, tragedy and redemption.  Featured soloists in this presentation include Tricia Goforth, Paul Reed, Bill Clark, Michael Roberts, Elena Harris, Laurie Ann Painter, Nicholas Raddi, Anthony Gismonde and Joan Nipe.

General admission is $7.00.  Tickets will be available at the door or by calling (856) 351-2602. There is ample parking and the theatre is handicap accessible.

The concert is made possible in part by funds from the New Jersey State Council on the Arts/Department of State, a Partner Agency of the National Endowment for the Arts, through the Salem County Board of Chosen Freeholders, and Salem County Cultural and Heritage Commission.

Caption: The Salem Community College Oak Singers will present their annual Spring Concert with “Choral Music Then and Now” on Saturday, May 13 at 3 p.m.  The concert will be held in the Sol and Jean Davidow Performing Arts Theatre in Davidow Hall on the SCC campus.