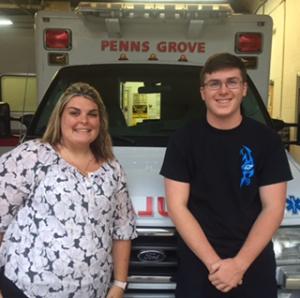 Salem Community College graduate Jenna Moore experienced a first as an EMT on June 29: She delivered a baby girl while heading to Inspira Medical Center Woodbury.

“Once I knew I was going to deliver the baby, my skills and education immediately took over and I did what I had to do,” said Jenna, a 2014 practical nursing (PN) graduate who also earned an associate degree in education in 2011.

“Afterwards, I was so surprised that I actually delivered a baby girl.  She had no intention of waiting for the hospital!  It seemed so surreal, it was the scariest moment of my life but an amazing moment also.”

Upon arriving at the hospital with Penns Grove EMT squad driver Grant Ashcraft, Jenna turned over the mother and newborn to the medical staff.  “They all told me I did a great job,” she said.  “I was just thankful that both mom and baby were doing well.”

Next on Jenna’s to-do list was to notify her captain. “At first she did not believe me, thinking we were teasing her until she read my report,” she said.

After the Penns Grove EMT squad gave a shout-out to Jenna and Grant on Facebook, they couldn’t avoid the spotlight.  “Honestly, it still seems surreal,” she said a week later.  “I actually delivered a baby! And I still have people to this day telling me congratulations or they heard that I delivered a baby. My main concerns were mom and baby and that they were healthy. I volunteer to help people in their time of need -- not for the appreciation. But it's nice to hear it once in a while though!”

Having graduated on May 20, 2017 with a bachelor’s degree in nursing from Widener University, Jenna has already had an eventful year.  She was one of only eight students to graduate with honors.  Soon she will take her state boards to become a licensed registered nurse. Jenna plans to work in the emergency department at the Memorial Hospital of Salem County.

Years ago, the Penns Grove High School alumna planned to follow in her sister’s footsteps as a teacher.  After earning an associate degree in education, she transferred to Rowan University.  “While in the teaching program, I realized nursing was my true passion,” she said.  “I decided to change my career path and I transferred back to SCC in fall 2012 to complete my prerequisites for the PN program.”

Upon earning her PN certificate, Jenna received the Nursing Faculty Award, presented annually to a graduate who “best represents the spirit of the nursing department mission, with moral and ethical characteristics, self-awareness, and appreciation for diversity.”

She has been a volunteer for the Penns Grove ambulance squad since 2015 and became a certified EMT in May 2016.  She also volunteers as an EMT with the Pedricktown ambulance squad.

Jenna plans to return to college for a master’s degree in nursing in a year or so.  Currently, she’s unsure of her specialty.  “I have thought of becoming a flight nurse or lately thinking of becoming a forensic nurse,” she said.

She’s thankful to have started at Salem Community College.  “My SCC education helped to give me a great college start right from high school,” Jenna said.  “My sister had a great experience at SCC and I was confident I would too.  I always knew SCC had an awesome Nursing program so as soon as I realized I really wanted to be a nurse, I knew immediately I would come back to SCC to start my nursing education.  The Director of Nursing, Chuck McGlade, was a huge influence in my nursing education and a true inspiration, as well as the many professors and clinical instructors.  Living local has a lot of benefits too. I enjoyed that I was able to live close by and still work part-time.

“I highly recommend SCC to everyone who plans to go to college. I had great communication and support from everyone and have been able to keep many friendships and contacts from my time there.”