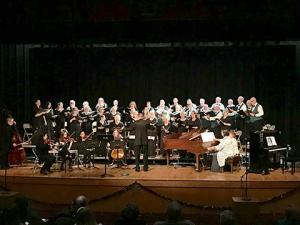 Changes are in the wind as the Salem Community College Oak Singers prepare for their annual spring concert on Saturday, May 12 at 3 p.m. in the Sol and Jean Davidow Performing Arts Theatre, Davidow Hall.

Later this month, Oak Singers’ founder and music director Charles Musser will retire after 29 years directing the choir and serving as SCC adjunct instructor of music.

The spring concert will be a bit nostalgic and inspirational as the choir will sing a number of their longtime favorites.  Other selections will reflect some of Mr. Musser’s personal favorites and pieces that have a special meaning to the director.

The opening selection is new to the choral library.  It is the opening of the “scenic cantata” Carmina Burana, by Carl Orff titled, “O Fortuna.”

Several of the 35-member chorus will have solos, including Marie Boody in a poetic semi –jazz arrangement of “Over By the Bay” and Michael Roberts in the spiritual, “I Got a Key.”  Other soloists include Rhonda Gage in “Even Here” and Tricia Goforth and David Gallagher in “Invitation.”

The program will include a variety of music including the pop classic “Bridge Over Troubled Water”; music by well-known choral composers, including Randall Thompson and Eric Whitacre; a thought-provoking selection in “The Awakening” by Joseph Martin; and, finally, two Broadway selections.  The first is from the show “Children of Eden” titled, “In Whatever Time We Have,” and the second, which will close the concert, is “Consider Yourself” from the show Oliver.  The arrangement of “Consider Yourself” was commissioned by the Oak Singers in 2012.  The arranger is Jeffrey R. Smith, Music Director of the Philadelphia Boys Choir and Chorale.

Of the current membership, only three were with Mr. Musser when he first started the Oak Singers in 1990: Karen Dingley, Marge Roeske (unable to participate this spring) and his wife, Patricia Musser.  Accompanying the Oak Singers for this concert will be Ben Patterson of Pilesgrove.  Ben is filling in for long-time accompanist Laurie Goforth.

General admission tickets are $7.  There is ample parking and the theatre is handicap accessible.  Salem Community College is located at 460 Hollywood Ave., Carneys Point, N.J.

The Oak Singers’ spring concert is made possible from a grant by the New Jersey State Council on the Arts through Salem County Board of Freeholders and Salem County Cultural and Heritage Commission.

Caption: The Salem Community College Oak Singers will perform their annual spring concert on Saturday, May 12 at 3 p.m. in the Sol and Jean Davidow Performing Arts Theatre, Davidow Hall, in Carneys Point.  Later this month, Oak Singers’ founder and music director Charles Musser will retire after 29 years directing the choir.