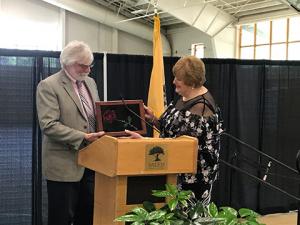 Since 2004, the Crystal Rose Award has been presented annually to an outstanding Salem County woman for lifetime achievements.

In the keynote address, SCC President Michael Gorman said, “Ceil is an education advocate, tirelessly working to acquire scholarship funds so young people have an opportunity to learn and solve the world’s problems.”

“I’m honored to follow so many women who have received the award before me,” Smith said.  “I thank the Community College and Chamber for the recognition.”

During a 30-year career in the newspaper industry, Smith served as advertising manager, general manager and publisher of Today's Sunbeam.

Her volunteer work with Salem Community College began in 2000 when she joined the SCC Foundation.  Her 14 years on the Foundation board were highlighted by tenures as chair and vice chair.

As the founder of the Partners of Salem County, Smith was instrumental in creating the Salem Community College Gala, which has raised $750,000 in scholarships since 2002.

After retiring from the newspaper business, she became executive director of the SCC Foundation in January 2015.

Caption: Ceil Smith receives the 2017 Crystal Rose Award from Salem Community College President Michael Gorman on June 13.  Since 2004, the Crystal Rose Award has been presented annually to an outstanding Salem County woman for lifetime achievements.  The crystal rose is handcrafted each year by glass artist and SCC Distinguished Alumnus Dennis Briening along with his wife, Leslie.  The Crystal Rose Breakfast is sponsored by the Salem County Chamber of Commerce.  Photo by Charles Erhardt.