Cat Burns in Season 2 of “Blown Away” | Salem Community College

Cat Burns in Season 2 of “Blown Away” 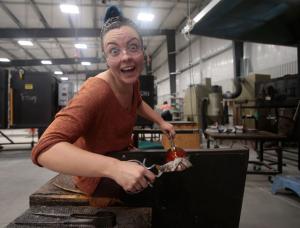 Cat Burns was at her family’s home in Woolwich Twp. in December 2019 when she received the invitation to appear in Season 2 of the Netflix reality series “Blown Away.”

“I got off a Skype call and basically burst through the doors, jumping and screaming at my mom,” recalled Cat, who had submitted a video and an application to the show’s producers several weeks before. “I legally wasn’t allowed to tell anyone but everyone knew that I had applied and got a call back so it was pretty obvious I had good news.

“I then made my younger sisters help me pick every outfit since my usual clothes are burnt t-shirts and I didn’t need them making fun of me for the rest of my life for dressing like trash on international television,” she continued. “I finished teaching a weeklong intensive in Corning [at The Corning Museum of Glass in New York] in January [2020] and got on a plane the day it finished.”

Cat arrived in Hamilton, Ontario for the taping, joining nine other elite artists. “There were something like 500 applicants and 10 spots,” said the 2012 graduate in Glass Art and Glass Craft and Design. “I didn't really think anything of it until I was on a plane to Canada, like, ‘Oh, this is real.’”

In “Blown Away,” talented artists “turn up the heat in glassblowing sculpture challenges for the chance to win $60,000 in prizes and the title of champion,” according to the Netflix website. The second season’s 10 episodes premiered on Jan. 22. The series also features Mike Shelbo, who demonstrated at the 2019 International Flameworking Conference (IFC).

SCC adjunct instructor Alexander Rosenberg appeared in Season 1 and serves as a guest judge in the new season. However, Cat was prohibited from approaching Alex (or anyone else) for tips before Season 2 taped. “Glass-wise, I didn’t do anything to prepare except do some strength training because I knew most of the assistants were students so I would have to do most of the heavy lifting,” she said.

The self-described defiant artist -- who worked for Corning in various capacities for five years, including stints on the Celebrity Solstice cruise ship -- described why she took a leap by applying for “Blown Away.”

“I have high-functioning anxiety so I made a promise to myself long ago that if an opportunity ever scared me, I had to at least try to go for it,” she said. “I went into the show a production glass worker with the least formal education and the least glass experience of anyone there and I came out of it a fulfilled artist. I was critiqued from some of the most renowned people in their fields, I learned and grew from their crits, and at the end of the day I left totally proud of what I accomplished. I became a braver artist because of it, I became more sure of myself.”

Cat’s journey in glass started over a decade ago when her mother persuaded her to check out SCC’s glass programs, then at the Glass Education Center in Alloway.

“My mother had heard of the program and nudged me in the direction of SCC. Proof that you should listen to your mothers,” said Cat.

“I loved fire from a young age. Living on a farm, we had bonfires every night,” she recalled. “I was kind of lost and had no idea what I wanted to do. I thought a semester of glass was kinda random and would just be fun while I figured out a ‘real’ plan since the old Salem glass facility was next to a horse farm I worked at. Turns out art can be a viable ‘real’ career path when you love something enough.”

Her proudest moment at SCC came at the 2011 IFC where she was selected for the high honor of working with the featured artist. “I assisted Laura Donefer, living feminist legend,” said Cat. “I also got to be in three of her fashion shows as a student which connected me to other artists.”

Cat pointed out the “feeling of family” is her fondest memory from her SCC years. “It was the other students at Salem that kept me there and kept my love of glass going because for the first time I found a rag-tag group of humans that supported each other's weirdness,” she said. “We drove each other to class, gave each other clothes, fed each other, made sure no one slept in their car on cold nights. The students were the most beautiful part of Salem and still are.”

Burns believes that family feeling has grown under the leadership of fellow alumna Kristin Deady, an inclusiveness that Cat considers a “priceless” commodity. “The advisors and teachers really care about you…. If you have ever felt lost, strange, or outcast you will find a weird and loving family in the glassblowers at Salem,” she said.

Her advice to prospective and current students is also priceless: “You have a world-class studio at your disposal. Your unlimited access to a facility of this magnitude with teachers constantly available to ask questions to only happens once in your life,” she said. “Take every advantage of it. Be in that studio from dawn to dusk making a thousand mistakes; they will teach you things no book can. Those mistakes will unlock art you had never even thought of. Fall in love with what your mistakes teach you. Take breaks from projects; have 10 going at the same time so that when you get bored or stuck you can bounce around. That way, you never feel like you're failing because you're just giving yourself space to figure out a problem. Keep detailed notes and never get rid of them. Beg for handouts if someone has one you don't. Most of our glass knowledge is passed down verbally and isn't in a book. It's up to you to be your own historian.”

After working at SCC as a lab monitor in 2019, Cat returned to Corning, N.Y., where she creates her exquisite art and sells it online at catburnsglass.com and wholesale through other stores. “In non-COVID times, I would also travel as a teacher,” she added.

And what does the artist look forward to the most each day? “As my own boss, I get to spend most of my day in pajamas with my dog, making absolute bank while dancing in my studio,” she said. “I get to decide when to take cookie breaks, when to take vacation and I get all the mental health days I need.”

Cat dismissed the idea that “Blown Away” has made her a reality TV star. “I’m definitely not going to become a celebrity over this. I personally don’t think it’s a big deal because I just did it for fun,” she said. “I’m just gonna keep playing with my horses and blowing glass."