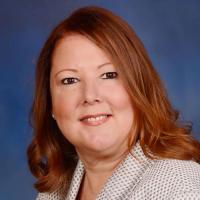 Bessie (BJ) Ayars is a lifelong resident of Salem County.  She graduated from Penns Grove High School in 1978 and Salem Community College in 1987. BJ credits SCC with providing experiences and opportunities that would change the direction of her future – the “little school that opened big doors.”

After graduation, she joined the staff of Holly Shores Girl Scout Council.  After an illness sidelined BJ for a period, she returned to SCC in 1998, earning a computer science degree in 2000.  BJ joined the SCC Information Technology department in 1999, working in a variety of roles for 11 years.  At SCC, she led the Alpha Pi Omega Chapter of Phi Theta Kappa International Honor Society.  Under her guidance, the chapter and its members earned national recognition. She was selected three times as a National “Distinguished Advisor.”

In 1991, BJ found her lifelong passion. Starting out as an EMT, she would also become a firefighter, hazmat technician, fire instructor, Community Emergency Response Team program manager, Red Cross health and safety Instructor and disaster response volunteer. BJ was part of Salem County’s response to the World Trade Center attacks and Red Cross disaster operations to Louisiana after Katrina.  Currently, she is a firefighter with Salem Fire Department and a lifetime member of Carneys Point Fire and Rescue.

Her experience, training and education would lead to a new career in emergency preparedness.  She was hired as the Operations and Training Coordinator for the Salem County Office of Emergency Services in 2009 and in 2013 joined the Emergency Preparedness Department at PSEG Nuclear.  BJ serves as Emergency Response and Offsite Specialist.

As the mother of a serviceman, BJ supported active soldiers and veterans’ organizations. During her son Michael’s deployments to Iraq, BJ became a vital member of the family readiness group. In 2003, she was awarded the U.S. Army Commander’s Award for Civilian Support and recently received the VFW Post 253 Civilian Award for Service.

She has become an accomplished photographer and owns Timeless Photographs by BJ Ayars, contributing countless hours of photography time to local organizations.