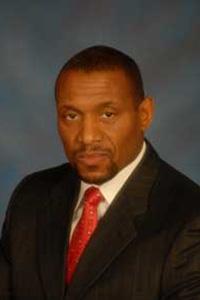 Penns Grove native Gregory Tyrone Wright is the second oldest of nine children – three girls and six boys. His life exemplifies the remarkable struggle of a person overcoming the odds of poverty and starting late in life to achieve his dreams. At an early age, church was a very important part of his life. To this day, he is still influenced by his religious upbringing where he learned not only to have respect for himself, but to respect others, be civil minded and to always be ready to help those in need.

Gregory graduated from Penns Grove High School but with no marketable skills, he seemed to drift from job to job. Although he was a hard worker, he became frustrated at not being able to find his niche in life. Ten years after graduating from high school, he learned about a pilot program in computer repair at Salem Community College. With much discipline and determination, he earned a certificate in 1989 and gained a new career. He returned to SCC to earn an associate in applied science degree in electronics/computer technology in 1994. Gregory has furthered his education by earning a bachelor’s degree in human services from Springfield College and a master’s degree in educational leadership from Wilmington College. He holds teacher’s certificates in computer systems technology, counseling and educational leadership.

Gregory is a member of the Penns Grove-Carneys Point School Board, presently serving as vice president.

Gregory has been involved with youth all his adult life, and believes it’s his ‘mission in life’ to help them understand the paramount importance of good character, respect, dignity, and pride – the main ingredients for a successful life. He is a member of the ‘Bridging the Gap Committee’ for the Calvary Community Development Corp. For the past three years, he has been director of a computer lab at Silver Run Recreation Center, where he teaches basic computer skills and tutors school-age youth. He has also been a member of the Alpha Baptist Church in Wilmington for the past 13 years and serves on the Deacon’s ministry.

He has been married for 27 years to the former Karen Yvonne Coleman. He has a daughter, Felicia.

Gregory considers himself a humble person who has not forgotten his roots. He will always remember where he came from and he realizes that with the right character, attitude and moral values, one can go far in life. His professional journey is indicative of his strong work ethic, persistence, positive outlook and love of people.

Gregory is very proud of his education from Salem Community College and frequently recommends the College to local students. At SCC, he received the nurturing and inspiration needed to continue his education. During those formative years at SCC, he developed the discipline, dedication, desire and self-motivation to continue to achieve.